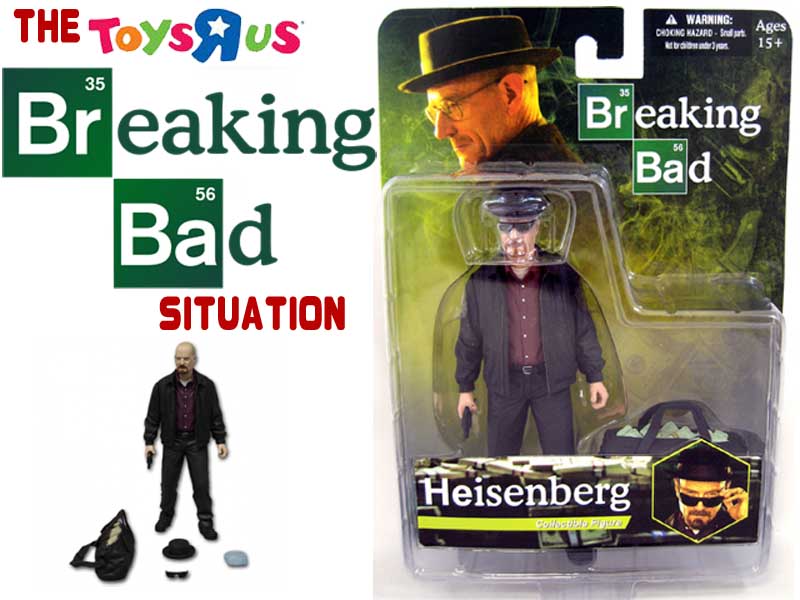 Fear of the Unknown

Fear of the unknown provokes outlandish response. That’s what happened recently when a Florida mother saw Mezco’s “Breaking Bad” action figures at a Toys “R” Us store. She proceeded to get on change.org to start a petition (as apparently everyone does these days) to get them pulled from the store shelves. She was featured on television shows, and the media had a field day with it, blowing things out of proportion as they usually do. Sadly, Toys “R” Us caved, and pulled them from the shelves, as well as from their online store. 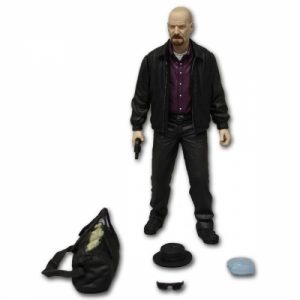 I have issues with this. The figure has been sold at TRU for over a year now, it’s not something that just popped up over the last week. The figure is clearly labeled for “ages 15 +” and was stocked in TRU’s adult collector isle of the store. It was not sold next to super hero and Mickey Mouse toys, as the mom would have you believe. Toys “R” Us has also been selling various Adult Collector lines for years now. They currently carry The Walking Dead, Game of Thrones, Predator, Aliens, and other product aimed at the older collectors, who TRU knows want these things, because most children these days are more focused on their electronic items. That’s the other problem; this mom has no problem with Grand Theft Auto 5 being sold right next to “family friendly” games like Skylanders, but somehow singles out this figure?

To play devil’s advocate for a moment, let’s assume this petition and reaction from TRU emboldens others to claim “offense” at something they don’t like, and had no intention of buying anyway. What if someone claimed that Monster High dolls offended them because it pushed an unfair and unhealthy image that all monsters needed to be like that to be popular? What if someone thought Pokemon figures would make their kids grab a ball and run out into the woods trying to “capture” an animal so it could fight for them? What about Nerf guns causing gun violence? Those thoughts are just as absurd as her thoughts expressed to a CNN affiliate: “Kids mimic their action figures, if you will,” she told the station. “Do you want your child in an orange jumpsuit?” If a parent buys this clearly adult themed figure for their child, I would be MORE worried for the child’s well being with the parent, than what a toy could possibly influence them doing. 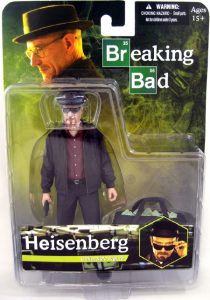 I don’t know how exactly she came across the figure to begin with, whether the child was running wild through the store, as I have seen on many occasions, or if the figure was picked up by someone, carried through the store, and left on another shelf after they changed their mind about the purchase. Either scenario is entirely possible, but she could have, and should have, kept on her merry way if she didn’t want to explain to her child that it was for adults, and not for children.

Adults are a big draw for companies these days, as we have the disposable income that they are after, and are willing to spend more to get the things we want. Stores like Toys “R” Us have noticed that, as have Target, Walmart and even Walgreens, who have begun carrying lines from The Walking Dead and Game of Thrones, among others. Are these people going to protest those stores as well? Not likely, because there is other product there that they want. Toys “R” Us hasn’t been strictly a ‘kids toy store’ in a long time, and if something on the shelf doesn’t interest you, just move along to something that does; don’t push to have it pulled, so those that DO want it, can’t get it in a local store.

In an effort to get TRU to change their mind, Daniel Pickett, and action figure collector and owner of AFI has started a counter petition in hopes of persuading TRU of keeping the Breaking Bad figures on the pegs in their stores. While BB star Bryan Cranston responded to the brouhaha over the figures on Twitter, costar Aaron Paul responded to the counter petition on Twitter, and also signed it himself.  Based on the terminology used in their statement about pulling the figures, I’m hopeful that TRU might be persuaded to out the figures back on the shelves at some point.

I fear the precedent this kind of action could snowball into with other easily offended in their own minds people who want to protect “the greater good” based on their beliefs. At the time of this writing, Pickett’s counter petition has over 53,000 signatures, almost 6 times the number of the original one that started this situation. If you are an adult collector, even if you aren’t a fan of Breaking Bad itself, please share the petition, or post on TRU’s Facebook page and let them know you support their right to offer adult collectibles in their stores. Remind them that #AdultsCollect as well.